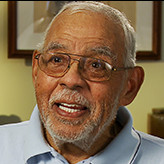 William Etienne "Bill" Pajaud (August 3, 1925 – June 16, 2015) was an African-American artist known for his paintings exploring themes of jazz. He was born in New Orleans, Louisiana. Pajaud's work has been featured in exhibitions at California African American Museum, Los Angeles County Museum of Art, Las Vegas Museum of Art. His work is in the collections of the Pushkin Museum, the Amistad Research Center, and the National Museum of American Art. He has been a member of the Society of Graphic Designers, the Los Angeles County Art Association, and the National Watercolor Society, of which he served as president from 1974 to 1975. His honors include the 1969 PRSA Art Exhibition Award of Merit, the 1971 National Association of Media Women Communications Award, the 1975 University of the Paci