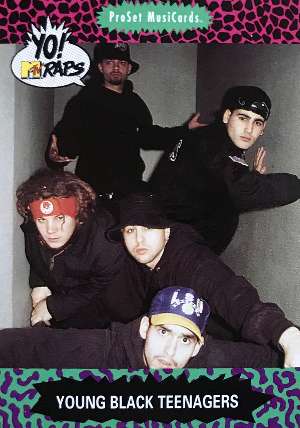 Members: Ata, Knowledgable Child, DJ Skribble, Tommy Never & First Born. Young Black Teenagers (YBT) was an early 1990s American rap group consisting of Kamron, First Born, ATA, Tommy Never, and DJ Skribble. Despite their name, none of the group was black. They intended their name as a tribute to the black culture they were influenced by, but some thought their name offensive or ridiculous. YBT had the support of the prominent rap group Public Enemy and their producer Hank Shocklee signed them as the first act of his label Sound of Urban Listeners (SOUL). They released their second album with MCA Records. Their debut album Young Black Teenagers (1991) featured the singles "Nobody Knows Kelli" (about the character Kelly Bundy from the sitcom Married With Children), "Proud to Be Black", and "To My Donna" (an attack on Madonna for taking the rhythm track of the Public Enemy song "Security of the First World" for her single "Justify My Love"). After the first album, Tommy Never inexplicably left the group, and YBT became a foursome, with A.T.A. contributing more vocally. Their second album, Dead Enz Kids Doin' Lifetime Bidz (1993), featured the song "Tap the Bottle", their biggest single. (from wikipedia)