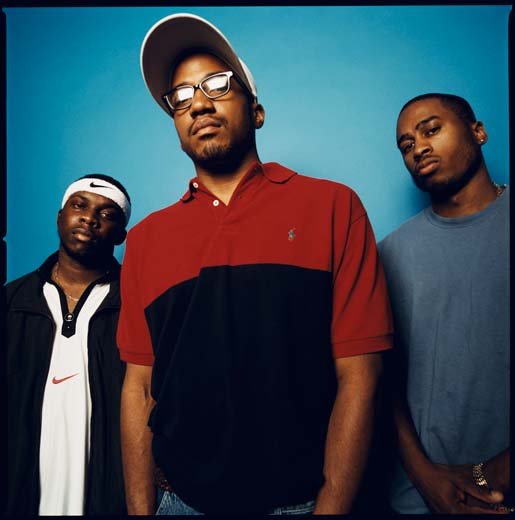 This US male rap outfit originally comprised Q-Tip (b. Jonathan Davis ―later changed to Kamaal Ibn John Fareed in the mid-1990's upon conversion to Islam― 10 April 1970, New York, USA), DJ Ali Shaheed Muhammad (b. 11 August 1970, Brooklyn, New York City, USA), Jarobi and Phife Dawg (b. Malik Taylor, 20 November 1970, Brooklyn, New York City, USA; d. 22 March 2016, USA). The group formed in high school in 1988 in Queens, New York City, NY, where they started out as part of the Native Tongues Posse, with Queen Latifah and the Jungle Brothers, and were given their name by Afrika Baby Bambaataa of the Jungle Brothers. Following their August 1989 debut, "Description Of A Fool", they had a hit with "Bonita Applebum" a year later, which was based on a real person from their school. Their biggest success came the following year with the laid-back "Can I Kick It?", demonstrative of their refined jazz/hip-hop blend. Q-Tip also appeared on Deee-Lite's August 1990 hit, "Groove Is In The Heart". While their debut, "People's Instinctive Travels And The Paths Of Rhythm", was more eclectic, and even self-consciously jokey, "The Low-End Theory" (recorded as a trio following the departure of Jarobi) blended boom bap beats with carefully selected jazz, funk, and soul melodies. ATCQ was helped considerably by jazz bass player Ron Carter (who had worked with Miles Davis and John Coltrane). Tracks such as "The Infamous Date Rape" stoked controversy, while samples from Lou Reed, Stevie Wonder and Earth, Wind & Fire were used in a frugal and intelligent manner. Q-Tip appeared in the 1993 movie "Poetic Justice" opposite Janet Jackson, and helped to produce Tony! Toni! Toné! (whose Raphael Wiggins made an appearance on "Midnight Marauders"), Nas, Shyheim and labelmate Shaquille O'Neal. ATCQ was awarded the "Group Of The Year" honor at the inaugural Source Magazine Hip Hop Award Show in 1994 before being moved off stage by the arrival of 2Pac and his Thug Life crew, who were attempting to steal some publicity. Two years elapsed before "Beats, Rhymes And Life" debuted at number 1 on the Billboard album chart with highly evolved lyrics addressing issues with greater clarity as compared to their past recordings. "The Love Movement", which debuted at US number 3 in October 1998, was another mature, stylish collection of material. However, it lacked the spark of their earlier works. ATCQ released "We Got It From Here... Thank You 4 Your Service" on November 4, 2016, nearly 18 years after "The Love Movement" album. In the midst of recording verses for the album as well as verses for his solo album, Phife Dawg passed away on March 22, 2016. During its first month of release, "We Got It From Here... Thank You 4 Your Service" was greeted with both critical acclaim and fan support.

Can I Kick It? on People's Instinctive Travels and the Paths of Rhythm by A Tribe Called Quest

Electric Relaxation on The Anthology by A Tribe Called Quest

Award Tour on Midnight Marauders by A Tribe Called Quest

Scenario on The Low End Theory by A Tribe Called Quest

We The People.... on We got it from Here... Thank You 4 Your service by A Tribe Called Quest

The Hop on Beats, Rhymes & Life by A Tribe Called Quest