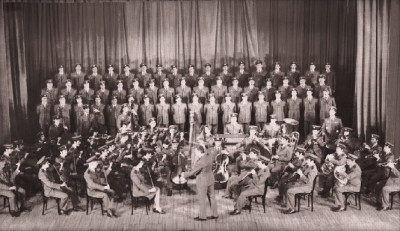 Romanian army ensemble, founded on May 1, 1947 after the Russian Red Army Ensemble model. In over 60 years of existence, the ensemble "Doina" of the Romanian Army, brought together orchestra, orchestra of folk music, pop music band, ballet, group vocalists folk and light music, band jazz, actors, directors, choreographers, stage bands. He participated in thousands of tournaments in the country and abroad, won awards at festivals, totaling thousands of hours of recording. "Significant for Art Ensemble of the Army, says Mr. Stelian Ungureanu, Director of the Assembly today, is that despite all the tests to which he had suffered 60 years of activity, kept springing identity from vein precious national spirit, especially the values ​​promoted Romanian song and dance, spiritual vocation cultivated Romanian artists prominently placed in the vaults of music, interpretive dance and Romanian. "