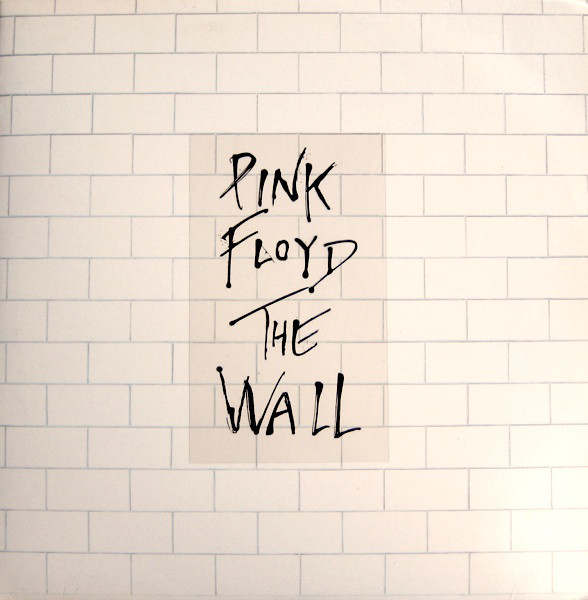 1st pressing with picture labels in gatefold sleeve with plastic sticker that adheres to the sleeve, but is not permantly stuck on. Inner sleeves also feature the "Wall" design with lyrics (graphics by Gerald Scarfe). The track order on the inners is not the same as featured on the album. Specific to the first issue sleeve: Band members are not listed on the inside cover. It only says "Words and Music - Roger Waters. Except..." and "Produced By David Gilmour, Bob Ezrin, Roger Waters". Re-pressings added band member credits and had other minor alterations. No bar code on the back cover. The Wall is cream coloured, not true white. The bricks on the front cover are not aligned right to the bottom of the cover on the outside or inside. There are two 1st pressing sleeve variants: 1. A single sheet of wrap-around cardboard with the seam across the inner top edge of the cover. 2. Two sheets of cardboard, with seams at the top and bottom of the cover. Cardboard is heavy thickness. There are two 1st pressing lyric inner sleeve variants (Both are on thick card with rounded corners and a nine-inch thumb notch at the top): 1. Sides 2 and 4 have the catalog number of the specific record listed on a single line in the lower right corner. 2. Sides 2 and 4 have the catalog number (SHDW 411), international catalogue number (OC-158 63410), and the UK catalogue number (SHSP 4111) in the lower right corner. Mastered at The Mastering Lab (Los Angeles, CA, USA). Recorded at Superbear (Miravel, France), Producers Workshop (Los Angeles, CA, USA) & C.B.S. (New York, NY, USA) between April and November 1979. Three different catalog numbers, one for the album and one for each disc: SHDW 411 = album OC-15863410 SHSP 4111 = disc 1 OC-15863411 SHSP 4112 = disc 2