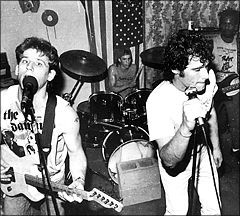 Scream was a hardcore punk band from Virginia, USA, formed in 1981 by brothers Pete (vocals) and Franz (guitar) Stahl, Skeeter Thompson (bass), and Kent Stax (drums). The band was later joined by second guitarist Robert Lee "Harley" Davidson. After the release of their 3rd album, "Banging The Drum", Stax departed and was replaced by Dave Grohl. The band continued for a few more years before splitting in 1990. Dave Grohl went on to find major success with Nirvana and the Foo Fighters. Pete Stahl has also performed with a number of bands, including Wool (2), Goatsnake and Earthlings? and collaborated with Sunn O))) or The Desert Sessions. He was also road manager for Foo Fighters or Queens Of The Stone Age. Franz Stahl was also a member of Wool (2) and, briefly, the Foo Fighters. Kent Stax played drums with Oi! band The Suspects. Scream has reunited for several reunion shows in the Washington, DC area over the years (with Stax in place of a very busy Grohl, although the latter has made some guest appearances).

Gods Look Down on Fumble by Scream

Came Without Warning on Still Screaming by Scream

Solidarity on Still Screaming by Scream

Bedlam on Still Screaming by Scream

Caffeine Dream on Fumble by Scream

Bet You Never Thought on This Side Up by Scream

Your Wars/Killer on Still Screaming by Scream

Sunmaker on Fumble by Scream