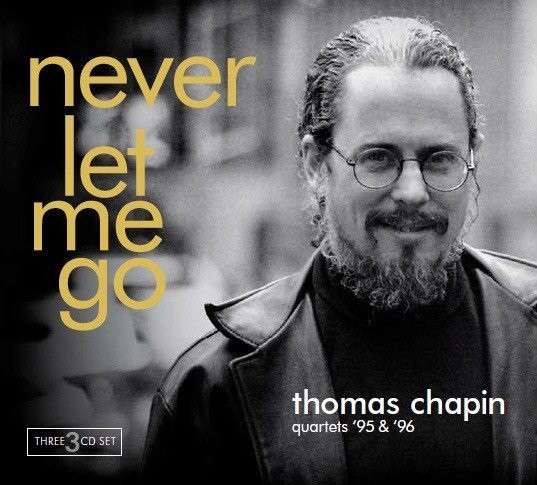 From Playscape's website: Unless you were there, this is Thomas Chapin like you've never heard him before. In the mid-1990's, the innovative multi-instrumentalist and composer was at the peak of his powers and just beginning to explore both the harmonic possibilities of the quartet format (following several records with his acclaimed trio) and the potential of his growing international fame beyond New York's Downtown Jazz Scene. Sadly, he was also just a short time away from being diagnosed with the leukemia that would abruptly end his life at age 40 in early 1998. Never Let Me Go: Quartets '95 & '96 thoughtfully chronicles the final chapter of Chapin's career with previously unavailable recordings from his family's private archive. Produced in cooperation with Akasha, Inc., this three-disc set documents two complete concerts: a November 1995 show with his working quartet from the early 90's (featuring Peter Madsen, Kiyoto Fujiwara and Reggie Nicholson) and his final New York performance in December 1996 with a brand new quartet (featuring Madsen, Scott Colley and Matt Wilson) that he hoped would take him into the future. The music is presented in context with liner notes from veteran jazz journalist and broadcaster Brian Morton, exclusive archival photos and remembrances from the musicians who joined him for these shows. Learn more about Akasha, Inc. and its ongoing efforts to preserve and advance Chapin's musical legacy at thomaschapin.com.