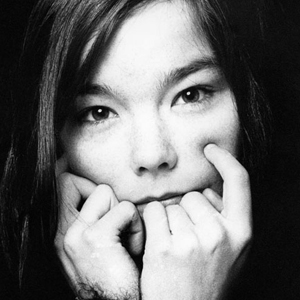 key, voc, *1965 IS, Reykjavík
Singer / Songwriter of Electronic and Pop
A.k.a. Björk Guðmundsdóttir

Björk Guðmundsdóttir (Icelandic pronunciation: [ˈpjœr̥k ˈkvʏðmʏntsˌtoʊhtɪr]), known by her stage name Björk, is an Icelandic singer and musician, born 21 November 1965 in Reykjavík. Well known for her creative compositional style and distinct singing, Björk's recording career began in 1977 at the age of 11, when she released (as Björk Guðmundsdóttir) her first album, while studying piano and flute at music school. Although the album became platinum, she refused to make another disco-folk follow-up and, at the age of 13, formed her first short-lived punk band, all-girl alliance Spit and Snot (Saliva and Phlegm), where she played the drums. Later on she was involved in projects such as Exodus and Jam 80, all of which without known record releases. In 1982 she launched punk-pop Tappi Tíkarrass (Cork The Bitch's Arse), releasing an EP and a LP, before she turned into a "serious" rebel by joining forces of the political "existential jazz-punk" of Kukl (Witchcraft), releasing three records. While Björk's vocal expression had matured in Kukl, she attracted worldwide prominence for the first time as one of the lead vocalists of the avant-pop Icelandic sextet The Sugarcubes. In 1992 she emigrated to the UK, launched a solo career and quickly eclipsed her old band's popularity. Rather than following the Sugarcubes' artsy guitar rock, Björk immersed herself in dance and club culture, working with many of the biggest names in the genre, and receiving remix treatments from Underworld, Dom T., Fluke, µ-Ziq, Goldie, Mika Vainio, Alec Empire, Bogdan Raczynski, Beastie Boys and others. Her first album Debut established her new artistic direction and became an international hit, making her one of the '90s most unlikely stars. Although the album was recorded with producer Nellee Hooper in 1993, its songs were actually composed during the previous ten years while she was in bands. Björk quickly developed as a producer, moving from co-producer role on her early albums to full producer role in her later work, as her Music Producers Guild Award for Innovation in the category of production testifies. She is well recognized in both pop and experimental music worlds: her album Vespertine became album of the year by The Wire Magazine in 2001 and she won more than 20 awards in Europe and received 15 nominations in the US. While Björk developed her unconventional song structures, she has worked with many renowned artists, mainly in the realm of electronic music. One of her long-time friends and main collaborators was Mark Bell of LFO who co-produced many of her songs and even co-wrote a number of pieces over the years. There are other artists who played important roles in the creative part of her work: Guy Sigsworth, Icelandic poet Sjón who helped on lyrics for some of her key songs and video director Michel Gondry. Acts such as Plaid, Leila, Matmos, Talvin Singh were at times part of her live band. Furthermore, she has shortly worked together with Howie B., Graham Massey, Tricky, Eumir Deodato, Mike Patton, Matthew Herbert, John Tavener, Evelyn Glennie and has sung duets with Thom Yorke, PJ Harvey, Catherine Deneuve and Anthony Hegarty. Cover♦Sample♦Björk♦Sugarcubes.

Venus as a Boy on Debut by Björk

Human Behaviour on Debut by Björk

Joga on Homogenic by Björk

Atopos on Fossora by Björk

All Is Full of Love on Greatest Hits by Björk

Come to Me on Debut by Björk